If One Person Smokes, Everyone Smokes

What is third-hand smoke?

It’s important to differentiate between the different forms of smoke exposure. First-hand smoke comes from the smoke inhaled by a smoker. Second-hand smoke refers to the combination of smoke directly from a burning object and exhaled smoke.

Third-hand smoke (THS) is something that is not widely recognized, yet carries significant health burdens. THS is the residual nicotine and other chemicals from cigarettes, cigars, and other tobacco products, that clings to inanimate objects and release into non-smoking environments for months to years later. These sticky toxic materials can bind to carpet, walls, nails, hair, clothing, toys, and other places where smoking has occurred. THS can take place during longer time frames than second-hand smoke exposure and can be incredibly difficult to remove from surfaces. 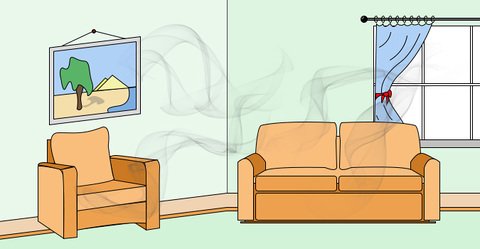 Babies and small children are more at risk, as they crawl on the ground, and are more likely to put their hands in their mouths. They also inhale 40 times more than adults.

What’s the harm in third-hand smoke?

While secondhand smoke has been more studied in the past, third-hand smoke is also linked to a range of diseases and detrimental effects. THS can raise the risk of blood clots, insulin resistance, liver steatosis, lung inflammation, cause hyperactivity, and slow wound healing.

THS can react to pollutant ozone to make tiny harmful particles. These superfine particles can make their way into a person’s lungs and be more of a threat than just nicotine alone. Smoke exposure results in inflammation of lung tissue, resulting in fibrosis, destruction of the alveoli, and an increase in mucus production. Asthmatics are placed at high risk, given the increase in inflammation, and the progressive difficulty in moving air. People with allergies also suffer given the increase in chemotaxis and secondary mucus hyper-secretion, which can worsen allergy symptoms and have limited relief from standard allergy medications.

Skin contact with THS can be just as harmful as breathing second-hand smoke. In fact, exposure to the skin of mice was found to profoundly affect the severity of asthma pathology in animals.

In utero smoke exposure has even been found to cause pulmonary damage.

Recent research from Yale University found that third-hand smoke can be carried via humans into non-smoking environments such as movie theaters. Refuting earlier beliefs that secondhand smoke was the only exposure the general public had to worry about. The data indicates the number of emissions wasn’t inconsequential either. The gas emissions were equal to the same exposure as 1-10 cigarettes in a one-hour period. The concentrations decreased in the subsequent days, but there was still residual emissions in the surrounding surfaces. The takeaway was not to avoid movie theaters, as they are actually large and well ventilated. But rather, bringing attention to locations that are less well ventilated such as public transits, bars, cars, and homes, which could expose someone to an even larger amount of chemicals.

The goal of the research is to influence public policy to reduce third-hand smoke exposure.

Smoking outdoors does not reduce the threat of thirdhand smoke. Opening windows, smoking in a designated room, using fans, or air filters does not reduce third-hand smoke either. The best thing you can do as a parent is to stop smoking. Ask friends and family to not smoke near your car or home. Also picking the childcare with no smoke exposure.

Stephanie joined the practice in 2019. Originally from Ohio, she received her nursing degree from Kent State University. She was a nurse in multiple fields before completing her training as a nurse practitioner at George Washington University in Washington, D.C. She enjoys making pottery with her husband, playing with her dog, and hiking with friends.